What is C- or REAR-riser steering?

In this feature, I am going to explain the function and benefits of the so called “Rear-Riser-Steering”. As an example, I will use the riser of the BUTEO XC, which has 3 riser levels, A, B and C. As the rear level is the C riser, we will therefore call it C-Steering. As you can see on the picture below, the C-riser is equipped with an additional handle, marked in RED.

Sketch A shows the riser non-accelerated and without the C-Steering deployed. Sketch B shows the C handle pulled down by the pilots hand.

When the pilot grabs the C-handle during flight, he is able to pull down the entire level of C-lines. This bends down the profile and changes the angle of attack which increase the lift as well as the drag resulting in the slowing of the glider. This demonstrates how the C-Steering can be used entirely to slow the glider, or initialize a turn by pulling down on one side. In doing so, the glider will perform a turn as the free side will fly faster than the engaged one.

What happens to the profile while using C-Steering?

Before talking about the benefits, let’s have a look about what is happening to the profile itself.
The profile picture 1 shows the lift distribution in stationary trim flight. The PITCH moment, indicated by the yellow arrow, is relatively low. Lift and drag are low too.

Picture 2 shows the profile with the C-lines pulled down(marked RED). As you can see , the lift has increased and lift-distribution has moved further down towards the trailing edge. This increases the pitch moment which forces the profile nose to rotate downwards. This momentum in rotation however will be effectively compensated by the increased drag ratio and change in center of gravity decreases the glider speed and results in a good profile
stability.

Picture 3 leads us to a braked trailing edge via the main brake lines (marked RED). This “flap” configuration increase the lift and drag dramatically. The pitch momentum is also way higher than in configuration 1 and 2. Such a braked glider will be slowed down a lot in speed as we well know. A positive effect is that the glider will feel much more rigid and solid, as the increased lift at the nose profile will suggest a better connection between the trailing edge brake input and the reaction, and movement of the leading edge.

When do I use C-Steering and what are the benefits?

There are generally two for using the C-Steering effectively.
1. Non accelerated.
2. Accelerated.
Let’s start with the benefits of the non accelerated C-Steering. In contrast to a normal brake input with the main brakes, the slowed down profile (picture 2) has a better drag to lift coefficient. Under certain circumstances, this leads to better climb rates in light but large thermal upwinds as the glider will turn flatter - higher projected area- and with a better glide ratio.

However, the real benefit of C-Steering is the usage once you hit the speed-bar. Let’s assume that you are fully accelerated and flying to pass a valley. Naturally you are looking for the best glide ratio so as to not lose height. If you were to fly accelerated whilst simultaneously using the main brakes, the glide ratio would be decreased as the drag created by the flap would kill the glide path. But as generally we don’t flying in laminar conditions, we are looking for an effective and safe way to steer the glider without losing performance. This is where the C-Steering starts to shine. Firstly, the glider can be easily steered over the rear risers without slowing it down a lot. Secondly the pitch momentum is way smaller than an initial touch of the main brakes. The pitch moment is quite an interesting point to take into consideration when flying. Increased pitch makes the glider rotate forward, which could lead to a front collapse once you are fully accelerated. This is quite easy to explain. Let’s say the glider’s profile is stable on X° angle of attack when accelerated. With a slight touch of the main brake, the pitch moment forces the glider to rotate 1° more than X° which makes the entire system more vulnerable to front collapse. However, the resulting profile when slowing down the glider with C-Steering has less pitch momentum and therefore wont rotate the profile nose that much. Simply saying, the glider remains more stable and controllable. Another positive effect is that by having your hands on the C-Riser, you will instantly recognise a change in structural stability while flying through turbulence which allows you to react faster when needed.

How about the down sides?

There is mainly only one downside to rear riser steering in general which has to be taken into consideration. Pulling down the C-level on a glider will slow it down. Some gliders will react very sensitively to any input on the rear lines which could lead to parachute stall behavior. To give you an idea about the dimensions, the BUTEO M has an effective deep stall point after 60cm of brake travel. This means that you have to pull over 60cm to fly at full stall. But, if you pull the C-lines more than 15cm (non accelerated) the glider will start to reach its stall point. As you can see, the ratio is 1 : 4 in this particular case meaning that flying with rear risers has to be trained under SIV conditions.

C-Steering is an essential tool for all pilots looking for maximum performance of their XC wings. The correct use of this flight technique has to be trained and isn’t suitable for all conditions. But generally speaking, C-Steering allows to push the borders of accelerated flying further and is always required if you are looking for ultimate cross-country results. 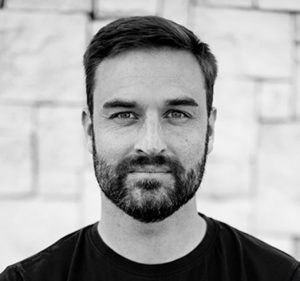 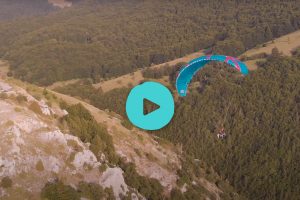 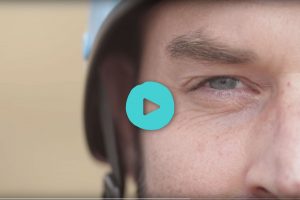 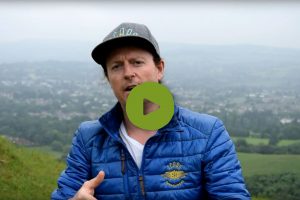 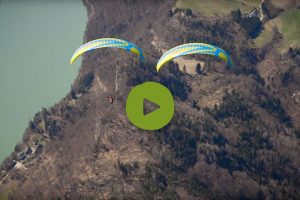